Our history spans over 150 years. And while we’ve grown and evolved, our commitment to the mission has remained steadfast.

In 1852, the Franklin County Agriculture Society purchased 88 acres located two miles east of downtown Columbus as a site for the first Franklin County Fair. In 1874, that land was made the official grounds of the Ohio State Fair. Ohio Legislature passed a resolution declaring the site as Franklin Park and open for public use in 1884. Inspired by the City Beautiful movement, the city of Columbus built a grand Victorian-style glass greenhouse in the park. Known today as the John F. Wolfe Palm House, it opened to the public in 1895 as Franklin Park Conservatory. The park was a popular destination for the surrounding community who enjoyed its carriage paths, lake and boathouse. 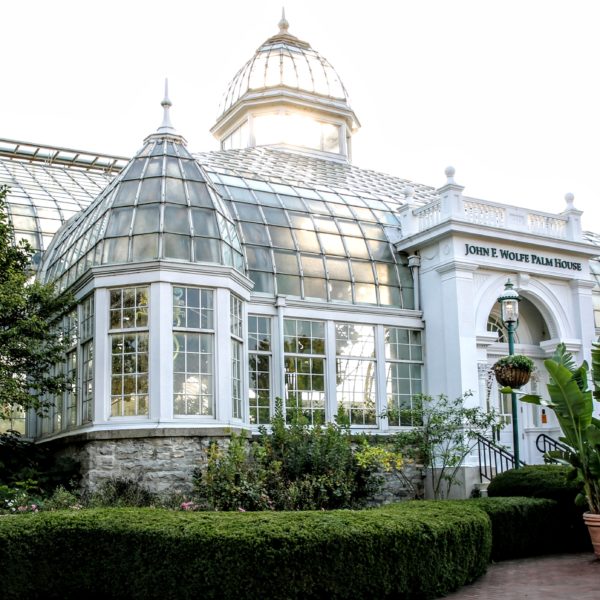 2020 was the 125th anniversary of the opening of the John F. Wolfe Palm House and Dorothy M. Davis Showhouse. Visit the Conservatory to experience these historic glasshouses for yourself.

Columbus Recreation and Parks Department owned and operated the Conservatory until 1989. During that time, the facility developed a reputation for horticultural excellence with the display of rare and unusual plants. The Conservatory also became a popular location for family gatherings, weddings and events. Ameriflora '92 Franklin Park and the Conservatory became the host site for AmeriFlora ’92, a six-month international horticulture exposition. Renovation of the historic Palm House and a $14-million expansion began in 1989. Additions totaled 58,000 square feet and included expanded plant collections, classrooms, a library, gift shop, café and administrative offices.
At the end of Ameriflora, Ohio Legislature created the Franklin Park Conservatory Joint Recreation District for the long-term management of the Conservatory. Ownership of the Conservatory and surrounding 28 acres was conferred to a new 10-member board of trustees and an executive director. World-Class Exhibitions In 1994, the Conservatory debuted Blooms & Butterflies, becoming the first conservatory in the nation to showcase a seasonal butterfly exhibition. More than twenty-five years later, this annual exhibition continues to attract thousands of visitors and school groups each year.

Several exhibitions that merge nature and art have followed. Chapungu: Stories in Stone was a collection of beautiful and compelling stone sculptures by self-taught artists from Zimbabwe, Branching Out featured the work of Patrick Daugherty, and Paul Busse’s imaginative garden railroads delighted all in Enchanted Express. Contemporary artists including Dennis Oppenheim, Laura Stein, and Andy Goldsworthy came together in the exhibition Bending Nature.

Glass artist Debra Moore’s orchids were displayed in 2011, and Aurora Robson’s sculptures debuted at the Conservatory in 2012. In the fall of 2013, the Conservatory hosted an exhibition by internationally recognized British artist Bruce Munro. Light at Franklin Park Conservatory featured 10 large-scale light installations and gallery works, and created an enchanting evening experience for Conservatory visitors.